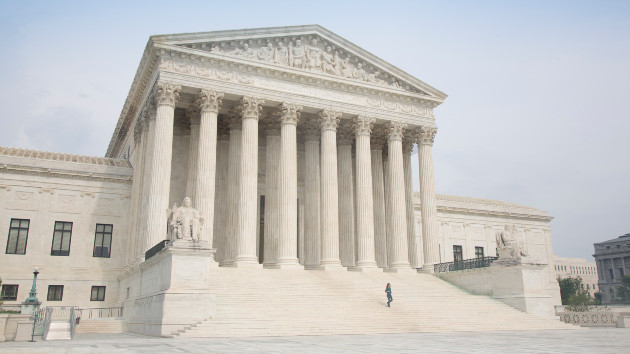 (WASHINGTON) — A unanimous Supreme Court on Friday dealt a setback to three Muslim Americans who are trying to sue the FBI for religious discrimination over surveillance in their place of worship after 9/11.

The narrow opinion, written by Justice Samuel Alito, reverses an appeals court ruling that would have allowed the suit to move forward over objections by the government that doing so would risk disclosure of secret and classified information.

The court said the government’s longstanding “state secrets” privilege is paramount and that a procedure established by Congress in the 1978 Foreign Intelligence Surveillance Act to allow trial courts to review the legality of some electronic surveillance does not apply in this case.

Yassir Fazaga, a former imam at the Orange County Islamic Foundation, and Ali Uddin Malik and Yasser AbdelRahim, both members of the Islamic Center of Irvine, allege the government and its agents illegally targeted members of the faith communities solely because of their religion. In 2011, they filed suit against the FBI.

“We are hoping to shed light on the agency that continues to treat Muslims as second-class citizens … unlawfully targeting Americans on the basis of their religion,” Ayhoush said last year.

A District Court dismissed the suit on state secrets grounds, but the Ninth Circuit Court of Appeals reversed and said the FISA mechanism could offer the men relief.

The FBI has acknowledged running a surveillance program at several Southern California mosques between 2006 and 2007 in a hunt for potential terrorists, but the bureau has not publicly revealed the basis for its covert operation or directly addressed claims of religious bias. The agency said allowing the suit to move forward would harm national security.

Alito wrote that Friday’s decision does not shut the door on the case entirely and that the men can return to the appeals court to challenge dismissal of the suit on state secrets grounds.

“We do not decide which interpretation is correct. Nor do we decide whether the Government’s evidence is privileged or whether the District Court was correct to dismiss respondents’ claims on the pleadings,” Alito wrote.

“According to [Fazaga, Malik and Abdel Rahim], the state secrets privilege authorizes dismissal only where the case concerns a Government contract or where the very subject of the action is secret. The Government, by contrast, relies on lower court cases permitting dismissal in other circumstances,” he wrote for the majority. “The Ninth Circuit did not decide those questions, and we do not resolve them here.”

“Today, we live to fight another day in our struggle to ensure that Americans who practice Islam are protected by the sacred right to religious freedom that our Constitution guarantees,” he said in a statement

For the second time in as many days, the Supreme Court showed deference to the government’s sweeping state secrets power. On Thursday, the justices quashed a bid by a Guantanamo detainee to depose former CIA contractors about alleged torture at an agency black site.

NYC subway shooting updates: Manhunt on for suspect
After The Show PODCAST: Hanging out with the talented & funny Richard Marx
New on Disney+ today, Marvel Studios’ Hawkeye
Need a pep talk? Kindergartners share encouragement, joy in viral hotline
Jodi’s rat intervention / What weird thing Sam keeps in his car / The world’s oldest dog with the funniest name
Adele’s 30 keeps the holidays at bay on both the Billboard 200 and Hot 100 charts