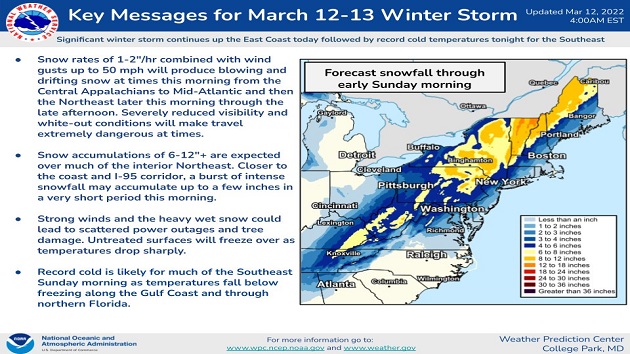 Courtesy of the National Oceanic and Atmospheric Administration
Posted on March 12, 2022 by ABC News

(NEW YORK) — The East Coast is getting hit with a major late-winter storm this weekend that is bringing severe weather from Florida to Maine, as tens of millions are under winter weather alerts.

After dumping several inches of snow in the Southeast, the storm is intensifying as it moves up the East Coast, with states on alert for wintry conditions, strong wind gusts, freezing temperatures, damaging winds and heavy snow and rain.

The heaviest snowfall is expected from Pennsylvania and northern New Jersey into Maine. As of early Saturday afternoon, the biggest totals so far have been across the central Appalachians into central New York, where over half foot of snow has been reported in some areas.

Up to a foot of snow is forecasted for inland areas from West Virginia to Maine, with the highest amounts expected in the Green and White Mountains of Vermont, New Hampshire and Maine.

The latest Key Messages for the impending eastern U.S. winter storm. Heavy snow and gusty winds are anticipated today from the Central Appalachians into the interior Northeast, followed by record cold in the Southeast Sunday morning. More information ⬇️ pic.twitter.com/Ul09j0hIsm

Snowfall along the I-95 corridor is expected to be lighter — between 1 to 3 inches from Washington, D.C., to Philadelphia and into New York City. Boston is expected to see heavy rain ending as a few snow showers.

By this evening, lingering precipitation will be focused mostly into northern New England. Strong gusty winds, blustery conditions and lingering scattered snow showers will persist across the region into the night.

Behind this storm system will be a bitter cold blast across the East. Wind chills are forecasted to be in the single digits Sunday morning from New York to Boston and feeling like the teens from Philadelphia and Washington, D.C., down to Raleigh, North Carolina, and Atlanta. Wind chills could be in the 20s in northern Florida Sunday morning.

Daily record lows will be challenged in multiple cities in the South over the next 24 hours, with temperatures running more than 20 degrees below average for this time of the year in parts of the region. A freezing warning has been issued for most of the Gulf Coast, including Florida, for Saturday night.

Thousands are without power amid the winter storm. As of noon ET, more than 183,000 customers were without power in Georgia, North Carolina, Florida, Pennsylvania and Virginia, according to PowerOutage.us.

Several St. Patrick’s Day parades were postponed due to the late-winter storm, including in Albany, New York, and Erie, Pennsylvania. In Knoxville, Tennessee, the parade was canceled due to the road conditions after several inches fell.

Adele recalls how she once used her fame to get out of a ticket, but claims she was “ready to go to jail”
A PRE-BIRTHDAY Toast to Jon Bon Jovi with his own rose
Teen arrested in connection to search warrant that led to Amir Locke’s death
“21 years of dreams”: Céline Dion posts sweet birthday message to oldest son René-Charles
An early Christmas gift: Pentatonix to release ‘Evergreen’ Oct. 29
Uvalde schools police chief defends response to mass shooting in first public comments since massacre