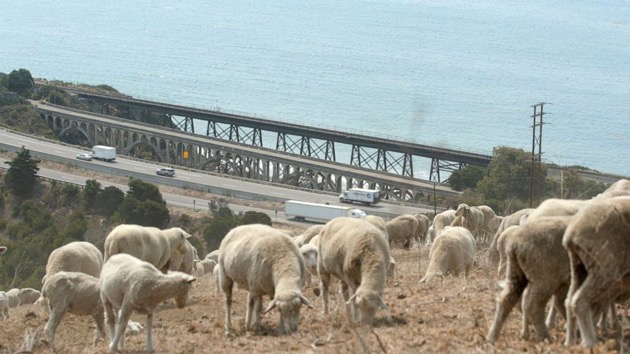 This is the second episode of ABC News Digital’s four-part series “Green New Future,” which highlights innovators and environmental solutions.

(NEW YORK) — The answer to managing wildfires may have been hiding in nature all this time.

Wildfires are a natural occurrence in forest ecosystems, but certain fire management practices have also contributed to the scope of fires occurring today, according to experts.

Flocks of sheep are now being used to manage fires as megadrought exacerbated by climate change contribute to record-breaking fire seasons in the Western U.S.

Climate change is not the only culprit. Six of the seven largest fires in California have occurred in the past two years, and experts including Glen MacDonald, professor of geography and environment sustainability at UCLA say natural fuel is building up in forests, sparking hot, intense and fast-moving fires.

Natural fuel is made up of forest components, including fallen leaves and bark. Ironically, decades of fire suppression — a fire management technique — have contributed to the scope of fires occurring today, according to experts. Fire suppression prevents natural fires that can facilitate renewal of the forests and clear them of natural fuel.

MacDonald described it as the “Smokey Bear mentality” — the notion of preventing any fires from sparking that became popular in the West toward the end of the 19th century.

“But what that allowed to happen was more and more fuel to build up in our forests,” MacDonald said.

As researchers study the perfect balance between allowing natural fires to burn and also preventing them from threatening human life, some believe sheep offer a better way to prevent flames from spreading so quickly once they ignite.

The fire department directs the sheep to the areas it decides are in most need of fuel mitigation, Schneider said, adding that the space the sheep clear can create a “burn break” that stops a wildfire in its tracks.

“Their job is one thing: eat,” Schneider said, adding that the sheep come in and chew the stock to the ground. The waste sheep leave behind also acts as a fire retardant, Schneider said, describing the grazing as a “powerful secret weapon” in firefighting.

The sheep are more efficient and cost-effective than using machinery to do the same task, Anderson said, and they can get to places that technology can’t.

“In terms of fuel management and clearance, this is a big state,” MacDonald said. “It’s a really expensive proposition to do that with mechanical fuel clearance or prescribed burns.”

Schneider and Anderson began the initiative after searching for “ways of being human on this earth that was not contributing to climate change,” Schneider said.

In 2018, one year after the Thomas Fire burned through nearly 300,000 acres in Southern California, Schneider and Anderson began conceptualizing Cuyama Lamb as others in the community also looked for alternative methods to combat the devastating fires.

The couple then began working with local fire departments to begin experimenting with animal grazing, Schneider said. It didn’t take long for them to discover how impassable plots of land are before the sheep come in and clear the vegetation, she added.

When successful, the technique also helps firefighters get a handle on wildfires faster.

“If you have an area that’s completely choked with vegetation, it’s just that much more fire intensity, and we can’t get our guys close to that area,” Daniel Fawcett, wildland specialist for the Carpinteria-Summerland Fire Protection District, told ABC News. “So if we can reduce the amount of vegetation, our guys can get it on the ground, put some water on it…and actually fight the fire safely.”

Schneider said she hopes the sheep allows Californians to “have a healthy relationship with fires” in the future.

“We aren’t going to save the world by grazing a few sheep up on the hillsides, but we can work with others and form coalitions and all of those threads when they’re woven together is going to make a real difference,” Anderson said.

Top women law enforcement leaders talk rising crime, midterms, future of policing
Ciara celebrates 36th birthday with husband Russell Wilson at the top of Seattle’s Space Needle
How Michael Bublé’s eight-year-old co-wrote the title track of his new album
‘Umma’ filmmaker celebrates proliferation of Asian American filmmakers
Sam’s May the 4th deals / Who’s going to a 70’s party? / Did Murphy accidentally kill all the goldfish in the pond at home?
After the Show PODCAST: The Good in Goodbye