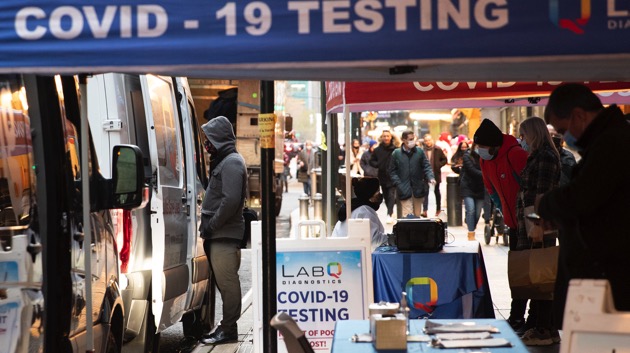 (NEW YORK) — As the COVID-19 pandemic has swept the globe, more than 5.5 million people have died from the disease worldwide, including over 843,000 Americans, according to real-time data compiled by Johns Hopkins University’s Center for Systems Science and Engineering.

About 62.6% of the population in the United States is fully vaccinated against COVID-19, according to data from the Centers for Disease Control and Prevention.

Here’s how the news is developing. All times Eastern:

Omicron became the dominant variant in New York City within five weeks after it was first detected, according to a new report released Thursday by the city’s health department.

By comparison, it took 20 weeks for the delta variant to become dominant.

The report, which details preliminary findings on the city’s omicron wave, found that there have been lower hospitalization rates but more total hospitalizations compared to the delta wave due to “significantly greater case numbers.”

Unvaccinated pregnant women with COVID-19 and their newborn babies have a higher risk of complications from the disease compared with those who are vaccinated, a new study found.

In the study, published Thursday in Nature Medicine, researchers from Public Health Scotland looked at vaccination rates and COVID-19 outcomes in 131,875 pregnant women in Scotland between Dec. 8, 2020, and Oct. 31, 2021, when the delta variant was dominant.

They found that 90.9% of COVID-19 hospital admissions, 98% of intensive care admissions and all 450 newborn deaths were in unvaccinated pregnant women.

The study reiterates the importance of pregnant women getting vaccinated against the virus due to a greater risk of dangerous health complications from COVID-19. A growing body of research has shown the vaccines to be safe and effective for pregnant women.

Following heated exchanges between Dr. Anthony Fauci and several Republican senators at a Congressional hearing Tuesday, more than 200 prominent science and public health leaders have now penned an open letter voicing their support of the White House chief medical adviser’s service and leadership — and condemning attacks against him.

“We deplore the personal attacks on Dr. Fauci,” the letter says. “The criticism is inaccurate, unscientific, ill-founded in the facts and, increasingly, motivated by partisan politics. It is a distraction from what should be the national focus — working together to finally overcome a pandemic that is killing about 500,000 people a year.”

The letter comes two days after a Health, Education, Labor and Pensions committee hearing, during which Fauci publicly accused Republican Sen. Rand Paul of fomenting the violent threats and harassment that he and his family have had to contend with during the pandemic’s politicized climate.

More than 300 children with COVID-19 are in Ohio hospitals, including Dayton Children’s Hospital, where workers are seeing a significant increase in pediatric COVID-19-related hospitalizations.

Dr. Vipul Patel, chief of pediatric intensive care at Dayton Children’s, told ABC News the ICU is now busier than at any other point in the pandemic.

COVID-19 is only exacerbating previously existing health issues for many children, Patel explained, adding that many parents are shocked to see their children become so sick, and some families have even expressed regret for not vaccinating their kids. Nationwide, about 35% of eligible children (ages 5 to 17) are fully vaccinated, according to federal data.

Dayton Children’s respiratory therapist Hillary O’Neil said it’s been particularly difficult to see children who are too young to understand what is happening sick and scared.

“You can see it in the faces of kids that can’t talk — their eyes get really big and they, we watch them struggle to breathe,” O’Neil said. “Then on top of that we watch their parents struggle to watch their child, and that is sometimes just as hard as watching the kids.”

Jackie Kerby, whose baby, Enaeshya, is hospitalized with COVID-19, told ABC News, “She’s getting these fevers in the night, and they’re not coming down. … I am terribly scared.”

Across the U.S. more than 5,000 children are currently hospitalized with a confirmed or suspected case of COVID-19, according to federal data. On average, hospital admissions among children have quadrupled over the last month.

New York state’s COVID-19 cases are falling after experiencing a major surge over the holidays, according to state data.

New York recorded 60,374 new cases in the last 24 hours — an improvement from New Year’s Day when 85,476 daily cases were reporting during a spike in testing demands.

The Supreme Court has issued a stay of the vaccine-or-test requirement imposed on private businesses with at least 100 employees by the Occupational Safety and Health Administration.

In a 6-3 ruling, with the three liberal justices dissenting, the court finds likelihood the challengers will prevail and that OSHA exceeds its authority.

At the same time, the justices voted 5-4 to allow the Biden administration to require health care workers at facilities that treat Medicare and Medicaid patients to be vaccinated, subject to religious or medical exemptions.

“Good news is that they were all fine. There’s been no significant issues,” he said.

“But it’s knocked them out of the operation” amid the busiest travel season in two years, he said.

Across the U.S., 3,783 TSA employees are currently at home with COVID-19, the agency said.

Biden said the White House is on track to roll out a website next week allowing Americans to order tests shipped to their homes.

Biden also made a plea to social media companies and media outlets.

“Please deal with the misinformation and disinformation that’s on your shows — it has to stop,” he said. “COVID-19 is one of the most formidable enemies America has ever faced. We’ve got to work together.”

The U.S. is now reporting an average of 1,650 new COVID-19-related deaths each day — up by about 50% since Christmas, according to federal data.

Twenty-six states are now averaging more daily cases than at any point in the pandemic, according to federal data.

Surging national case numbers, however, may not be indicative of what is happening in every region of the country. Some areas could see a decline or a plateau in cases, according to some experts.

Teams of doctors, nurses and clinical personnel will be sent as early as next week to New York, New Jersey, Ohio, Rhode Island, Michigan and New Mexico, Biden is expected to announce on Thursday alongside Secretary of Defense Lloyd Austin and FEMA Administrator Deanne Criswell.

Biden in December directed the defense secretary to ready 1,000 military medical personnel to deploy to hospitals across the country as needed in January and February. The teams now being readied will be the first to start arriving at hospitals.

Biden, Austin and Criswell on Thursday will also “be briefed on the administration’s efforts to send resources and personnel to hard-hit communities across the country that are experiencing a surge in hospitalizations due to the Omicron variant,” according to a White House official.

Jan 12, 7:24 pm
Testing labs now struggling with their own staffing shortages due to virus

The labs shouldering much of the nation’s PCR COVID-19 testing are getting slammed with demand again during omicron’s surge, and now they’re grappling with a new challenge: their workforces are getting hit by the virus they’ve been tasked with tracking.

The American Clinical Laboratory Association, the national trade association representing some of the leading clinical labs responsible for COVID diagnostics, is warning that their members’ workforce is strained as more workers call out sick.

“Labs are now facing a wave of new issues brought on by a fast-spreading variant that has not spared the laboratory care work force,” an ACLA spokesperson told ABC News.

“We have been pressured to get our capacity where we believe it can be because of the labor problems we see,” Quest Diagnostics CEO Steve Rusckowski said Wednesday at the JPM Healthcare Conference. “Some of this is just getting the labor to do our work, but secondly, is because of callouts because of the virus have been considerable over the last two weeks.”

Chicago teachers voted Wednesday to accept the deal made by the union and city to re start in-person classes.

The deal ended the five-day standoff after the union voted to switch to remote learning due to the omicron surge.

Union leaders made a tentative agreement on Monday and urged teachers to back the deal despite frustration that the district wouldn’t grant demands for widespread coronavirus testing or commit to districtwide remote learning during a COVID-19 surge.

The final agreement will expand COVID-19 testing and create standards to switch schools to remote learning.

The deal also resulted in the purchase of KN95 masks for students and teachers and bigger incentives to attract substitute teachers. The city also agreed to give teachers unpaid leave related to the pandemic.

The U.S. Army released an update on the vaccine status of its members.

All armed service members are mandated to be vaccinated against the coronavirus.

The Army has chosen not to discharge unvaccinated soldiers but instead “flag” them so they’re not promoted and are not allowed to re-enlist.

“To date, Army commanders have relieved a total of six active-duty leaders, including two battalion commanders, and issued 2,994 general officer written reprimands to soldiers for refusing the vaccination order,” the Army said in a news release.