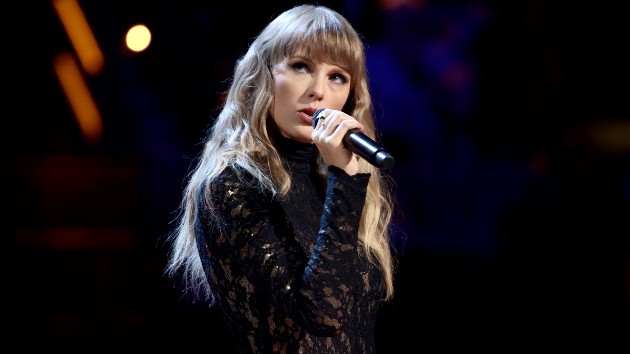 Dimitrios Kambouris/Getty Images for The Rock and Roll Hall of Fame
Posted on November 11, 2021 by ABC News

Taylor Swift and her fans love Tumblr, so it’s no surprise she’s used the platform to debut a clip of one of the “From the Vault” tracks we’ll be hearing Friday on Red (Taylor’s Version).

The song she’s previewing is “Babe,” but unlike some of the other “From the Vault” tracks, this song’s actually been released, albeit by another artist.  In 2018, the country duo Sugarland released their version of “Babe,” with guest vocals by Taylor, and it reached the top 10 on Billboard’s Hot Country Songs chart.  Taylor also appeared in Sugarland’s video for the song.

“Babe” was originally co-written by Taylor and Pat Monahan of Train for the original 2012 version of Red, but didn’t make the album.

In other Taylor news, she’s revealed on Instagram that the “short film” she’s made for the 10-minute version of her fan-favorite song “All Too Well” will be out at 7 p.m. ET.  In addition to Sadie Sink and Dylan O’Brien, Taylor co-stars in the film, which she also wrote and directed.