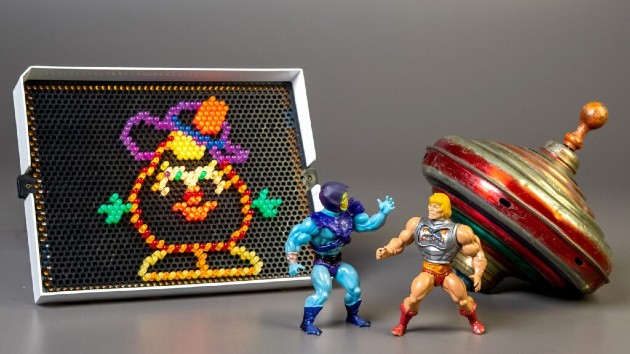 Courtesy of The Strong Museum
Posted on November 11, 2022 by ABC News

The Toy Hall of Fame has announced this year’s inductees, and while its experts always look back at what people have played with over the years, this year they went way back — thousands of years, in fact.

That’s why the humble spinning top made the list this year — along with He-Man and the Masters of the Universe and the classic Lite-Brite.

Christopher Bensch, the chief curator at the Strong Museum of Play, which unveiled the winners, noted, “The top is one of the oldest toys and an integral part of many cultures, where it developed independently as a plaything. With more than 5,000 years of history behind it, it’s about time that the top spun its way into the National Toy Hall of Fame!”

He-Man and the Masters of the Universe began as an ’80s phenomenon, which recently saw a resurgence with new toys aimed at adult Gen Xers who grew up on the action figures and their cartoon tie-in. The well-muscled hero and his super-powered friends also came to Netflix in 2021 with the animated Masters of the Universe: Revelation; the streaming service previously reimagined the He-Man spin-off She-Ra, Princess of Power. A new live-action big-screen He-Man adventure is also in the works.

Curator Michelle Parnett-Dwyer, commented, “Masters of the Universe characters had the strength, weapons, and power to defeat the villain—and give kids confidence. He-Man, after-all, regularly asserted ‘I have the power!"”